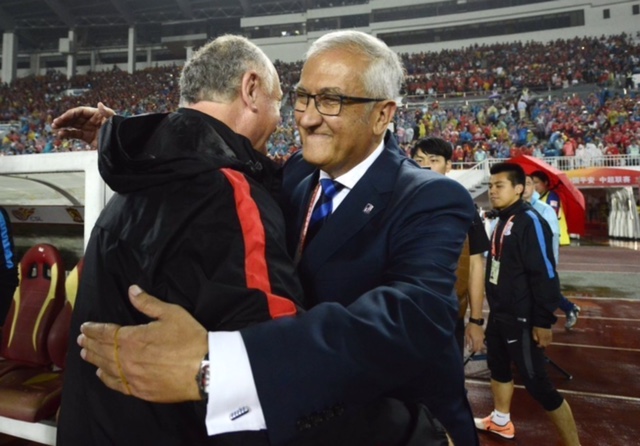 Just as if we were in the Tour de France, we have started the league with the high mountain legs of the race, after playing our first three matches away against Evergrande, Jiangsu and SIPG. These are currently the top three teams in the table.

Now we can draw some initial conclusions about the team’s strength going forward. I sincerely believe that the first impressions have been very positive. We have been very competitive and shown a good level at each of these three stadiums. We had several good chances in each match, and only a little bit more precision in the final metres or a tiny amount of luck have prevented us from winning some points.

Last week we faced the powerful Guangzhou Evergrande, winner of the last five editions of the Chinese SuperLeague. This was a big match; the rival team included some of the best Chinese players (most of them play for the national squad) and top-flight foreigners: Paulinho, Goulart, Alan and Jackson Martínez.

The first half was very tight, with chances on both goals, and although we shut out Paulinho, their brain in midfield, and Goulart, their key striker, close to the end of the first half the third Brazilian player, Alan, managed to score a long distance shot.

After the break, we came onto the pitch with the intention of levelling the match. We were sure we could do this and our belief grew even stronger after our goalkeeper, Geng (who was playing his first game) blocked a penalty spectacularly. We dug deep and continued attacking until our striker, Demba Ba, topped off an excellent play with the equaliser. This was our best period of the match, but unfortunately, the rival has such a strong squad that they are able to turn the tables at any given moment. That is precisely what happened; not long after our equaliser, Alan sent another excellent long-distance shot right into the top corner of our goal, putting the local team ahead once again.

We continued to fight until the last minute, but were unable to draw. We can safely say that this was a top-level match, which was decided by one player’s inspired talent. We returned to Shanghai with a heavy heart because of the result, but we had the consolation that none of the top three teams have been clearly superior to us. Now we must put this behind us and start preparing our next match, this Saturday in Liaoning, where we must focus on keeping up with the leaders of this race.