760 is the number that best sums up Gregorio Manzano’s extraordinary career as a football manager.

760 km is the distance that he travelled daily to coach Talavera FC. After spending all day teaching high school, Gregorio Manzano would get into his car with just a sandwich and a bottle of water and set off on the journey.

His long journey towards a dream…

Read more
Gregorio Manzano’s path to the Chinese Super League was not an easy one. Like every great dream, it required great doses of eagerness and passion for his work. The power of a dream, great mental strength, willingness to make sacrifices and a permanently positive attitude have allowed Gregorio Manzano to fulfil his dream and to continue fulfilling new dreams every day. In recent years, he has been coaching in Asia, first the team of the Chinese capital, Beijing Guoan, for two seasons, and subsequently Shanghai Shenhua and Guizhou HengFeng.

The pursuit of a dream is a beautiful journey.

Unlike most of his colleagues, Manzano was not a professional player before becoming a manager, but a high school teacher, at IES El Valle, and psychologist, which earned him the affectionate nickname of “The Professor.” He did play at amateur level in clubs like Recreativo de Bailén, where he was recently named honorary president in June 2014.

Manzano’s career as a manager began in 1983, when he balanced teaching and managing the local team of Santisteban del Puerto, in Jaen. Over the following years, his knowledge of psychology and teaching skills led many local clubs to seek his services and so he managed various grassroots teams until he arrived at Ubeda Club de Futbol, where he made his Third Division debut in 1989.

After managing Ubeda C.F., Real Jaen and C.D. Martos, in 1996 he was signed by Talavera C.F. in Second Division B. He remained at the club for two seasons before making his Second Division debut when he moved to C.D. Toledo in 1998.

After just one season in the silver category of Spanish football, his outstanding trajectory attracted the attention of Real Valladolid. He became the Castilian team’s First Division manager for the 1999 season and led the club to its best result in the previous twenty years.

Valladolid was then followed by Racing de Santander and Rayo Vallecano until, in 2002/03, he became manager of RCD Mallorca and led the team to win Spain’s Copa del Rey, his greatest achievement and the centenary club’s only title to date.

This extraordinary success opened the doors of Atletico de Madrid, one of the great clubs in Spain, where he secured qualification for the UEFA Intertoto Cup. He then moved to Malaga C.F., before returning to RCD Mallorca in February 2006, where he remained for 5 seasons and managed to qualify for the UEFA Europa League, whilst also becoming the club’s manager with most Spanish league matches (221).

In the 2010/11 season, Manzano managed Sevilla F.C. and qualified for the UEFA Europa League. In the summer of 2011, he returned for a second stint at Atletico de Madrid and, on 5 February 2013, RCD Mallorca confirmed his signing for the third time. The following year, on 11 February 2014, he agreed to manage Beijing Guoan, the team of the Chinese capital. He remained at the club for two years and subsequently coached Shanghai Shenhua in the 2016 season and then Guizhou HengFeng for another year. Sus estudios universitarios en psicología hacen de él un entrenador metódico, analista y moderno en sus sistemas de entrenamiento y dirección de equipo. Bajo su dirección jugadores como Navarro, Güiza, Mario Suarez, Aduriz, Borja Valero, Víctor o Fernando Torres han debutado con la selección española. He has also managed famous stars like Etoo, Kanoute, Caminero, Ibagaza, Luis Fabiano, Radamel Falcao, Nadal, Palor, Rakitic, Forlan, Moya, Courtois, Negredo, Jesus Navas, Arda Turan, Aouate, Giovanni Dos Santos, Shao Jiayi, Eusebio, Nunes, Arango, Diego and many others.
Among his greatest achievements is the 2002-2003 season, when he won Spain’s Copa del Rey with Real Mallorca, knocking out Real Madrid and Deportivo de La Coruña and winning the final against Recreativo de Huelva. Manzano is generally considered as the best manager in the history of RCD Mallorca. He is also the active manager with most victories at Santiago Bernabeu stadium, especially highlighting a historical date for RCD Mallorca, 3 May 2003, when the team beat Real Madrid by 1-5 at their own home ground. In addition to the Copa del Rey success, Manzano qualified RCD Mallorca for the UEFA Europa League on two separate occasions, as he also did with Sevilla, which he then managed in the competition. Between his tenures at Atletico de Madrid and Sevilla, he has managed 17 matches in the UEFA Europa League with excellent results: 12 victories, 2 draws and 3 defeats. In 2008, he was named Manager of the Season in La Liga by the prestigious sports magazine, Don Balon. 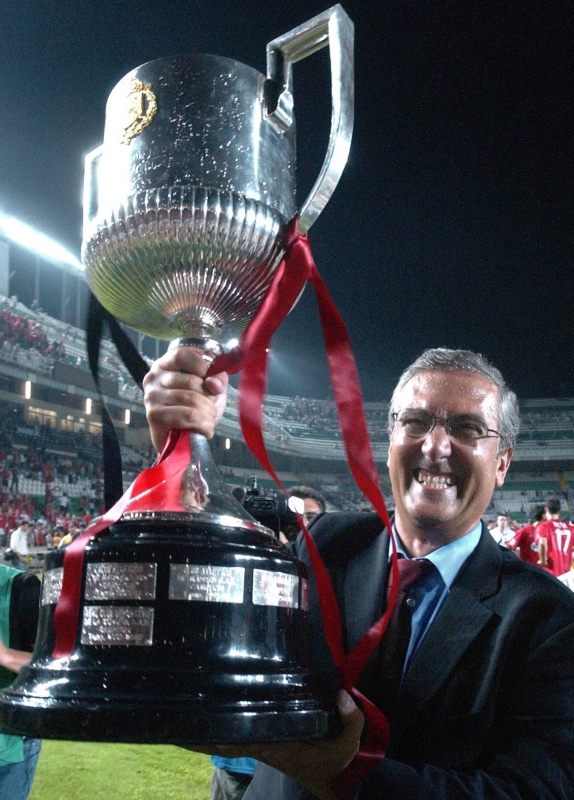 This is the professional career of a manager who, without having been a professional player, became a First Division coach 20 years ago and has so far managed over 500 matches.
Press Office of Gregorio Manzano