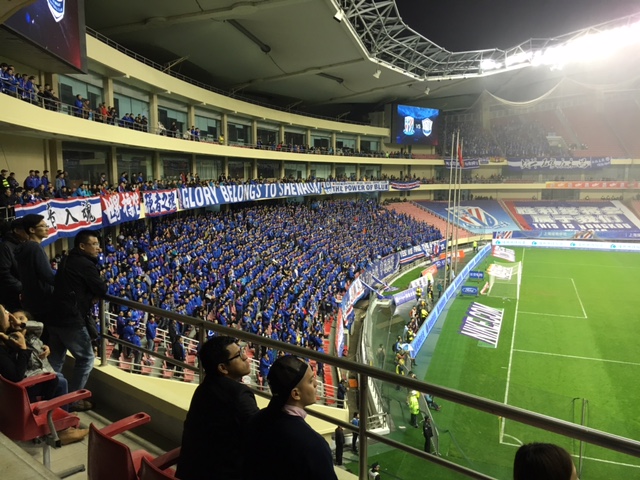 Last week we travelled to Nianjing to play against Jiangsu, current leader of the SuperLeague. We knew the match would be very tough because our rival was strong and had signed great players, like Alex Texeira, a Brazilian midfielder who cost 50 million euros and became the most expensive signing in the history of Chinese football. They also had former Chelsea player Ramires, who cost 38 million euros and became the third most expensive player, only behind Texeira and Jackson Martínez, who moved from Atlético de Madrid to Guangzhou Evergrande.

The match itself was fiercely contested. They played with a 1-4-1-4-1 formation, while we opted for a 1-4-4-1-1. Neither team managed to score before the break, so the second half looked very promising.

I began to notice that the opposition’s physical condition was starting to dip, so I decided to change our system slightly, substituting Yunding Cao (28) for Yun Wang (20). I also put together Gio Moreno (10) and Guarin (13) closer to the rival’s box, leaving Sheng Qin (26) as the only defensive midfielder. The intention was to regain the midfield, so we would have better chances to reach the opposition’s goal and win the game. Soon afterwards, Gio Moreno had a great opportunity, followed by another chance a few minutes later, when his headed corner hit a defender’s hand. Unfortunately, the referee did not see it and, soon after that, in the 83rd minute, we conceded a free kick and defended poorly, allowing Jiangsu to score a painful goal. After having been in control of the match at such a tough rival’s home ground, we had allowed them to score. Later, in overtime, they even scored a second, following a lack of concentration in defence.

Thus, we have suffered our first defeat in the tournament. Although it was not our best game, the team fought until the end. As the famous Spanish General, San Martín, used to say: “A contested defeat is worth more than a victory by chance”.

Next week we will face Hebei, a newly promoted team that has also spent a considerable amount in some very good signings. But we will be playing at home, supported by our fans, so we must win this match. In the words of Malcolm Forbes: “Victory is sweetest when you’ve known defeat”. We expect so.