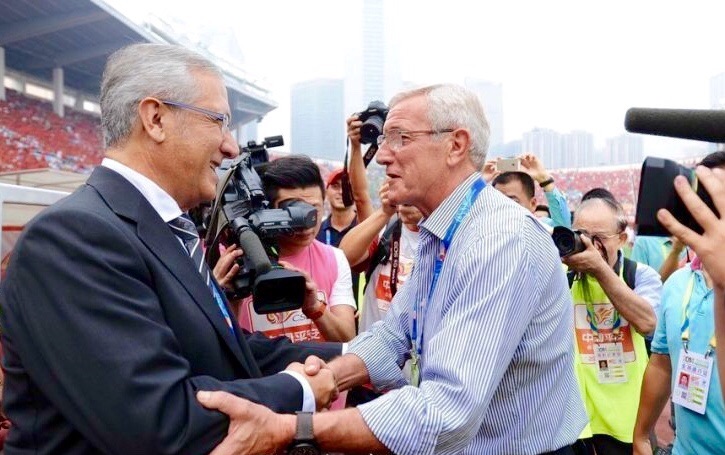 Beijing Guoan, managed by Spaniard Gregorio Manzano, held out for 88 minutes at the leader’s home ground, Guangzhou Evergrande. But at that moment, just when the local fans were preparing to celebrate the League title, the team from the capital gathered their last remaining strengths and silenced the crowd as they took the victory and three crucial points. A free kick scored by Jiayi Shao, the 34-year-old Bundesliga veteran, threatened to turn the championship around.

The title will now be decided in the last ninety minutes of the season, as both teams play their respective matches at home whilst paying close attention to the results coming in from the other side of the country. Marcello Lippi’s Guangzhou only needs a draw to win the championship, whereas Manzano’s Guoan must win and hope that their rivals stumble to complete their unthinkable feat.

The Spanish manager is still cautious but very happy, after making it to the last game with a chance of making history at his current club. He has broken down every barrier put in his way so far; the Beijing club has 66 points, have won 21 of the 29 matches played and have gone 9 consecutive games without a defeat. After securing a position in the qualifying round of next season’s Asian Champions League, dreaming about the possibility of winning the League is an added bonus; the result of the Club and its manager’s hard work, who will never forget the 2014 season.

It is in this context that Gregorio Manzano is preparing the final clash against Henan Jianye; a tricky hurdle since the visitors will be fighting to remain at the top category. However, for the Spaniard, after a highly successful debut season, the hardest part is now over. On Sunday, at the Worker’s Stadium of the Chinese capital, Beijing Guoan’s fans will have more than enough reason to celebrate regardless of the match’s outcome. A coach from Jaen has made it all possible.