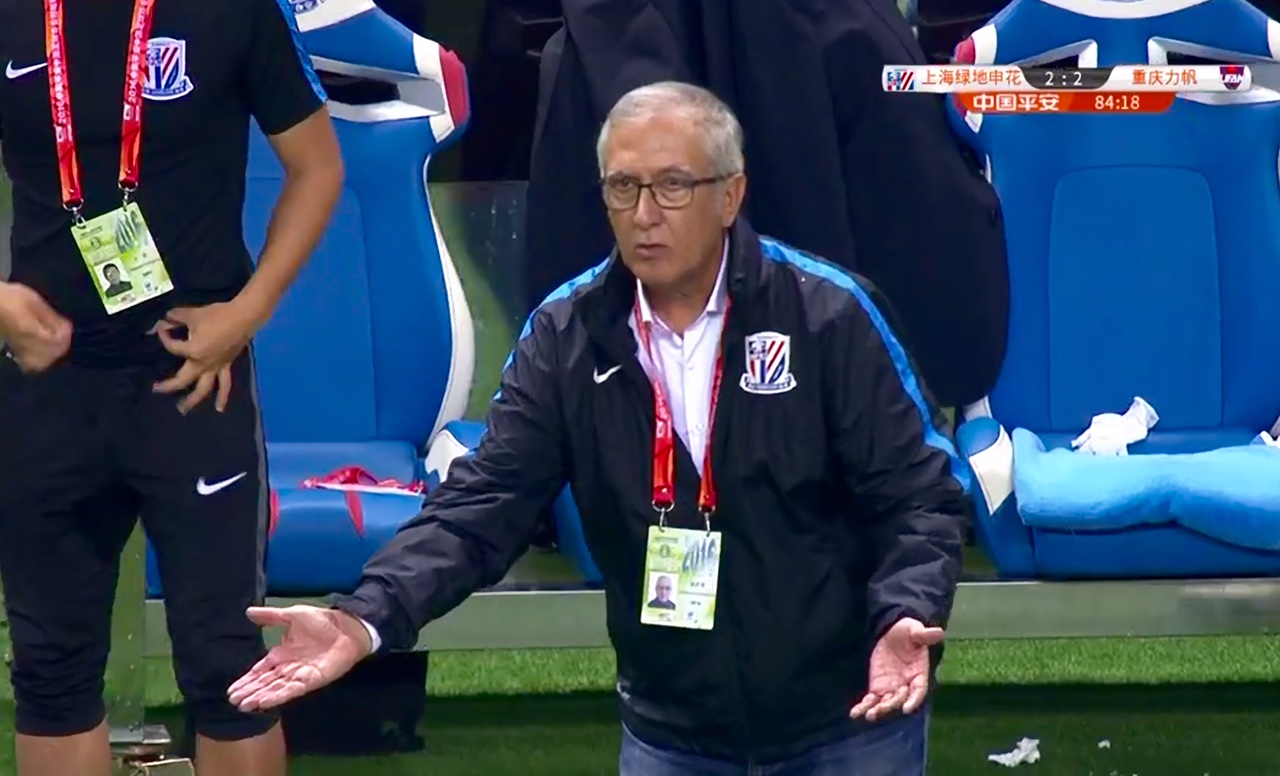 Recently Manzano reached 600 matches in his professional career. At the helm of Shanghai Shenhua, the Chinese team he currently coaches, Manzano is very likely to qualify for the AFC (Asian Football Confederation) Champions League next season.

“We have a very good chance because we depend on ourselves. But we mustn’t let up until we reach the end,” Manzano said firmly in the hotel where Shenhua stayed following a meeting with the Club’s managers at midnight.

A master of psychology

Manzano set out the objective at the beginning of his period in Shenhua: to fight for a place in the Champions League. At this point, the Chinese Super League is nearing its final stages, and each team’s position in the ranking is increasingly closer to the final result. As the team’s coach, Manzano assumed the largest share of responsibility, and thus more pressure than his players. However, the coach from Jaén, who has a degree in Psychology, never lets pressure affect his mental stability.

Manzano says he usually meditates before each match. “I close my eyes and meditate about every possibility in the match; it serves as psychological training. For example, how I would act if we started off winning, losing, or if the tie continued.” After each game, Manzano usually evaluates the match and the decisions he took.

In his spare time, Manzano disconnects from football and books are his best company. He is currently reading one about Egyptian history, “The path of the Gods.” “Reading helps me to disconnect from football and think about other things,” he says. “I like to read self-help books. It also gives me material when I motivate my players before each match. I always try to approach games with the most positive attitude possible.”

At Shenhua’s training facilities there is a door that is always open: that of the Andalusian coach. Everybody can talk to him whenever they want. “So far I haven’t given my players any psychology classes, but I have used certain methods to motivate them,” explains Manzano. Which methods specifically? Of course, that is his secret.

Despite being a close person, Manzano has his own style as a coach. This season, he has established new internal rules at the club and controlled the players’ attendance to training sessions. Manzano demands punctuality from his players and makes no exceptions. Anyone who is not there 45 minutes before the start of the session has to pay a fine.

At 60, Manzano looks after every player as if they were his own children.

Manzano was also the most affected by Demba Ba’s unfortunate injury. He feared that the team would suffer with his loss. However, he was surprised by the team’s spirited reaction. “When Demba was on the pitch, we relied heavily on his individual talent; without him, we were forced to realise the importance of the team’s synergies.”

As for Martins, the Spanish coach has nothing but praise for him. “When Demba was fit, Martins played fewer minutes, but he is a top professional and never complained. After Demba’s injury, it was Martins’ time to shine, and we have all seen his outstanding performance.”

On the other hand, despite his absence from the team, Demba has never been too far. He spoke with Manzano on the phone last week. “We have always been in touch”, explained Manzano.

Manzano currently lives in the modern district of Xintiandi and likes to lead a homely life, even though he spends most of his time working. Manzano studies match recordings at home, both of his rivals and his own team.

Throughout the 33 years of his professional coaching career, he has always maintained a habit: writing in his diary. He now has numerous notebooks and his wish is to publish his own biography. Manzano currently posts his thoughts and reflections on his personal blog which is regularly updated.

Just one year after his previous experience in Beijing, the Spanish coach has now adapted to Shanghai’s cosmopolitan lifestyle. Manzano finds it very pleasant going to work each day together with all the other citizens of Shanghai. He likes the city’s lifestyle.

“The greatest surprise for me has been the support and warmth of Shenhua’s followers each match. I had never imagined it would be like this,” said Manzano as we concluded the interview.