Gregorio Manzano, Head Coach of Beijing Guoan: “It would be an honour to manage the Chinese national team” 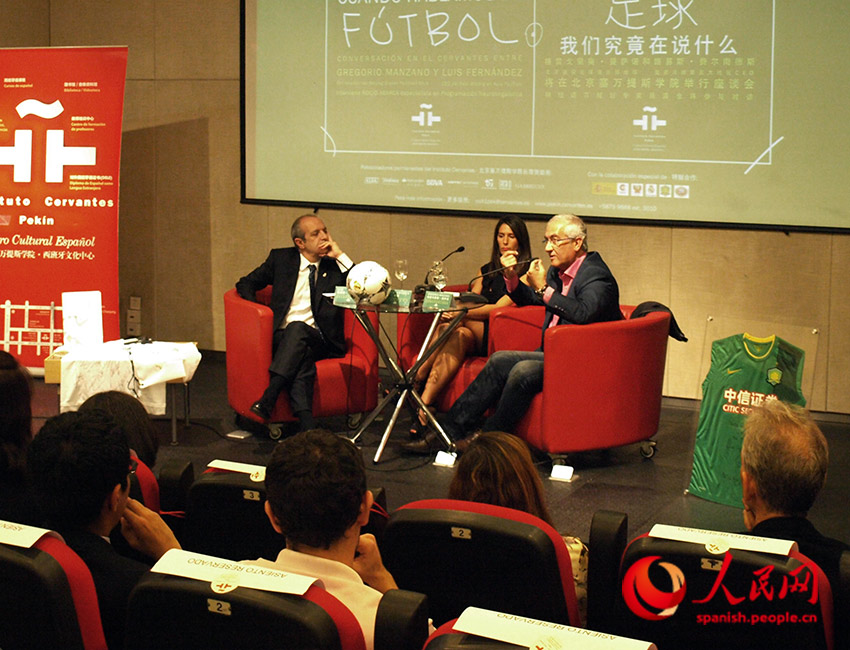 Now that the Chinese Super League 2015 is over and the views are set on the next season, Instituto Cervantes’ Beijing branch had the opportunity to welcome Gregorio Manzano, Head Coach of Beijing Guoan (the capital’s team), and chat about football, among friends and followers.

During the lively meeting, “Professor” Manzano was accompanied by Luis Fernández, CEO of Real Madrid for Asia-Pacific, and Rocío Abarca, member of Beijing Guoan’s technical staff.

The friendly match kicked off by considering “What we talk about when we talk about football” and then followed the ball to examine the most universal of all sports.

“Very often, we are not aware of the enormous effect that this simple element (a football) has throughout the world. A ball, on a field with 22 players, can gather 3 o 4 billion people to watch the final of a football tournament”, pointed out Manzano. “This situation is brought about by the ball. In the past, I’ve managed teams with players from different nationalities: Spaniards, Greeks, Venezuelans… who were just united by one thing: the ball. That is football”.

On February 11th, 2014, Gregorio Manzano agreed to coach Beijing Guoan and, since then, the club’s followers have seen their team grow consistently. This year they placed fourth in the Chinese Super League, after an initial season where Manzano managed to lead Beijing Guoan to the second place.

“The first thing we did was to start elaborating a game system that allowed us to win and also play attractive football. At the beginning of last season we had some very positive results and the team began to find its own identity and grow from there. We even fought for the title at one point”, remembers Manzano.

Last year, the Chinese government decided that the Ministry of Education would be in charge of coordinating the teaching of football and the sport would be imparted at schools and academies throughout the entire country. This new measure aims to popularise football among children and the young, and to systematise and improve its practice. When the decision was announced, Vice Premier Liu Yandong was cited by China Daily as saying that “China must develop its football if we wish to achieve our goal of being among the world’s elite at large events”.

However, the national team has had very little international success. Despite having an official team since 1924 and being part of football’s governing body (FIFA) since 1931, China has only been able to participate once in a World Cup, in 2002, and even then, “the Dragons” returned home without having been able to score a single goal. This poor result put the Asian giant in the penultimate position of the table, only ahead of Saudi Arabia.

“We cannot compare Chinese football with Spanish football, because it is very recent”, explains Manzano. “The Chinese Super League has just been running for 25 years. China has a long way ahead and needs to start thinking about a structure for its football. I don’t just mean improving the Super League, which is the visible result and what appears on television. Progress needs to start at the very base; where the players who will compete at the top level are formed”.

“Chinese football still has some way to go”, emphasised the Spanish coach.

Nevertheless, the Chinese Football Federation has said that China will try to host the 2026 World Cup, if the four Asian countries bidding for the 2022 World Cup are not successful.

“The Spanish national team has won the European and World titles. That was not a matter of luck; it happened because all the lower categories of Spanish football have also won titles. Most players who make it to the national team have been winning gold medals since they were 15, 17, 19, 21… China has to start thinking about creating a structure like that. In the future, a country of such size would turn out very good players”.

Manzano, former coach of Atlético de Madrid, is the first Spaniard to manage a club in China’s top division and last season he was named Coach of the Year by the Chinese Football Association.

“When we talk about Messi and Cristiano Ronaldo we are talking about two outstanding goal scorers. That is what every team needs: a goal scorer. The main problem in China is that none of the goal scorers are Chinese. Most Super League teams have foreign players in attack, and that is a problem that should be resolved because what the Chinese national team will need are strikers, goal scorers”, cautioned Manzano.

According to Luis Fernández, CEO of Real Madrid for Asia-Pacific, “Professor” Manzano could become the next technical manager of the Chinese national team.

“I can see you in that position; your personality, your professional experience and many other qualities would fit in with the Chinese national team. You have adapted very well to China, you enjoy Beijing, and you also love developing sport in general and football in particular”, explained Fernández.

The Chinese national team was already managed by a Spanish Coach, José Antonio Camacho, between 2011 and 2013.

“Three or four years ago I had an offer to coach another team China (not Beijing Guoan), which I turned down at the time”, explains Manzano. “At that meeting, in Madrid, I was asked about my response if the Chinese national team approached me and I said I would accept. And back then I didn’t know anything about China. Nowadays, after living here and getting to know its football, if that offer came it would be an honour for me to manage the Chinese national team”.

PrevAnteriorA new challenge: “Yes, we can”
SiguienteThank you for everything ChinaNext