Kicking off the 2016 Season 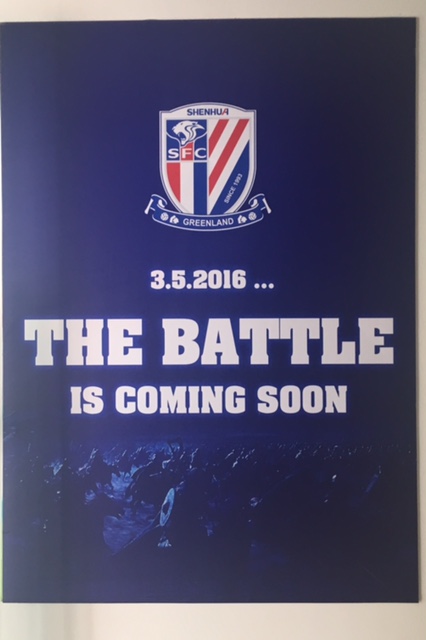 The 2016 season of the Chinese Super League kicks off next weekend. This will be my third consecutive season coaching in this great Asian country, the first at the head of Shanghai Shenhua, after coaching Beijing Guoan for the past two years.

At the start of each new year we always have many dream goals, objectives to strive for and challenges to overcome. The Spanish technical staff, which I am very proud of, is also looking forward to this season and are confident that our work will produce the desired results at the end of this season.

The team has been transformed with respect to last year, and we have eight new players who are gradually adapting to the new training methods and style of play that we wish to instil with each new practice session.

The new signings include Fredy Guarin, a powerful and talented midfielder from Inter Milan, Obafemi Martins, who has joined us from the MSL to continue his long and successful career, and the third foreign player, Kim Kee He, an imposing and talented Korean fullback from Jeonbuk. In addition to them, we have also incorporated the goalkeeper Li Shuai, from Guangzhou Evergrande, defenders Wang Lin and Li Yunqiu, centre back Bi Jinhao and midfielder Qin Sheng.

All these new players have joined last year’s team to form the squad we will manage in our mission to improve the club’s sixth position from last season. It will not be an easy journey.

All the teams in the Chinese Super League have broken their investment records this year. A total of 350 million euros have brought great players from European teams, whose talent will be enjoyed by the increasingly numerous Chinese fans. Thus, players like Jackson Martínez, Lavezzi, Texeira, Ramirez, Gervinho, Mbia, Kakuta and Gulüm will add their skill to their new teams. This will be a tough and exciting League, which will be followed by a large part of the footballing world, particularly in Europe.

My team is physically and mentally prepared to compete at the top level with any rival and we hope to start with a victory in our first game next Saturday against newly-promoted Yanbian. We expect to have the support of all our fantastic fans and will work very hard to make sure they enjoy this outstanding championship.